Fishman Honors Tarkett as Vendor of the Year for 2022

Fishman Flooring Solutions, a distributor of flooring and flooring installation supplies, named Tarkett its Vendor of the Year for 2022 at the company's annual sales meeting, which took place January 17-19, 2023, in Baltimore, Maryland. Fishman also honored Ryan Dufault of Novalis as its 2022 Vendor Rep of the Year at the meeting. 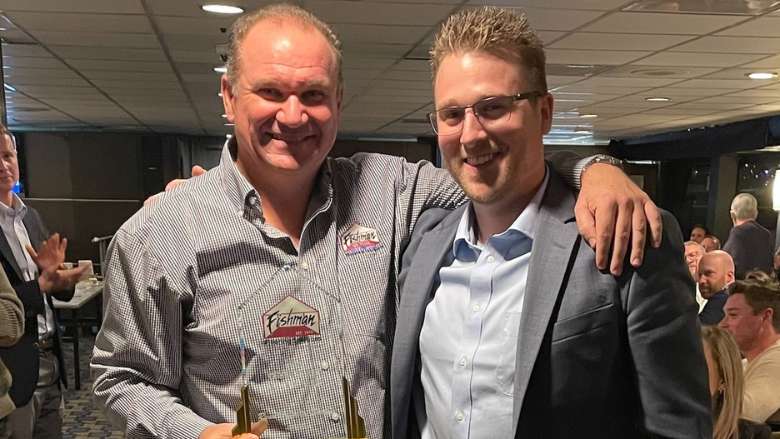 (Left to right) Fishman’s Greg Vale celebrates with Ryan Dufault of Novalis, who was named Fishman’s Vendor Rep of the Year for 2022. Photo: Fishman.

“2022 was a record year for Fishman in terms of sales and earnings, but we were challenged throughout the year with supply chain problems,” said Greg Vale, Fishman vice president of sales. “In situations where products are in short supply, continuous communication between a distributor and its vendors is vital to meeting marketplace demand. The unparalleled information sharing between Tarkett and Fishman and Ryan Dufault and Fishman enabled us to get Tarkett and Novalis products to our customers when and where they were needed. The awards Tarkett and Ryan received last week were in recognition of those outstanding communications efforts.”

Approximately 170 Fishman vendors, customers and employees participated in the event, making it the largest in-person sales meeting in the company’s history. Among the features of the meeting were a Vendor Showcase, where 35 Fishman vendor partners shared information on their products with the Fishman sales team and educational mini-sessions provided by Ardex, Mapei, Powerhold, Taylor Adhesives and Traxx.

Fishman also recognized several members of its sales team for their outstanding performances in 2022. The Southeast Region, managed by Jay Harvey, was named Region of the Year. In addition, Daniel Koutavas was recognized as Business Manager of the Year; Tyler Harvey was named Rookie of the Year; and Kyle Chezem, Gary Crowe, and Michael Swoope were named Transformers of the Year for increasing sales substantially in their territories.