This website requires certain cookies to work and uses other cookies to help you have the best experience. By visiting this website, certain cookies have already been set, which you may delete and block. By closing this message or continuing to use our site, you agree to the use of cookies. Visit our updated privacy and cookie policy to learn more.
Home » Feizy Rugs Announces 'Design and Display' Contest Winners
Breaking Flooring NewsFloor CoveringsTalkFloor NewsArea Rugs 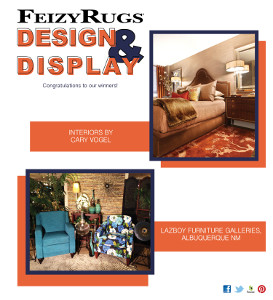 Feizy Rugs has announced the winners of its first annual Design & Display Contest.

La-z-boy Albuquerque (Albuquerque, NM) was the Retail winner for their use of Saphir Callo design 3261F Cream/Silver. Interiors by Cary Vogel (Las Vegas, NV) won in the Designer category with their use of Bodhi design 6033F Rust.

“This was such a great way for us to interact with our clients via social media,” said Leah Feizy, executive vice president. “It’s always inspiring for us as a company to see how our pieces are put to use.”

Winners received $750 to be used toward their next Feizy Rugs purchase.  Plans are in the works for another contest, the details of which will be unveiled early next year.