Karndean Celebrates 40 Years by Giving Back 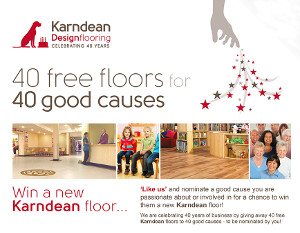 Karndean Designflooring is marking its 40th anniversary in the luxury vinyl flooring industry by pledging to give back to the community it serves.

The global flooring brand is officially launching its Karndean Designflooring 40th anniversary campaign this fall. Founded in the United Kingdom in 1973 by young entrepreneur Michael “Mike” Walker, Karndean now employs 300 people globally, with nearly half of those employees being located in United States. Karndean Designflooring was established in the United States in 1998 and now has distribution centers in three cities across the country.

In honor of its success creating beautiful realistic wood and stone effect luxury vinyl flooring, the anniversary campaign will look to help local charities and organizations throughout the world.

“Our 40th anniversary as a global company is a great achievement and we decided the best way to celebrate is to give back to our customers and help a variety of excellent causes in the communities we serve,” said Emil Mellow, VP of marketing. “As a global brand, we have a lot of exciting plans to continue to highlight our anniversary year.”

To kick-start the celebrations, Karndean launched its ‘40 Free Floors for 40 Good Causes’ campaign on its Facebook page. The petition calls on users to nominate charities that they think deserve to win a free Karndean floor, up to 1,500 square feet. There will be 15 winners chosen from the United States in total, with five handpicked by Karndean and ten selected from submissions via Facebook.

And the giving doesn’t stop there. Inspired by Smokey the dog, the Great Dane who is still present on Karndean’s logo today, Karndean is showing its support for the Pennsylvania SPCA by donating $1 for every Facebook ‘like’ pledging to raise $5,000. This campaign is scheduled to begin in early 2014.

“In the USA, we are about 15 years old, but the successful business we have built here could only have been built upon the foundation that began 40 years ago in the UK,” explained Ed Perrin, CEO of Karndean Designflooring. “We have been successful in developing and maintaining a strong reputation throughout the industry for our signature Karndean quality and specialty design flooring.”

For more information on the 40th Anniversary of Karndean, visit http://www.karndean.com/birthday.