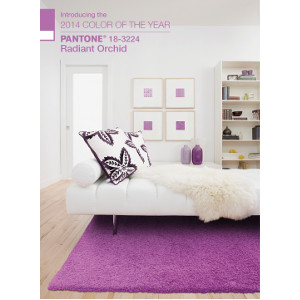 Pantone's 2014 Color of the Year is Radiant Orchid 18-3224 and Oriental Weavers has incorporated the sought-after color into the company’s new designs, launching at the January markets.

Pantone describes the selected shade of purple as captivating, magical and enigmatic.

As announced this year, Oriental Weavers and Pantone Universe, the consumer products brand of parent company Pantone, formed an exclusive partnership for the design and manufacturing of fashion-forward, chic and colorful area rugs.The Radiant Orchid shag rugs are already in-stock and ready to ship, giving Oriental Weavers’ retailer partners an edge in offering products boasting the 2014 Pantone Color of the Year.

“Our number one goal is always to produce fashionable, on-trend area rugs that help our retailers attract consumers to their rug departments and most importantly, sell more products. Having the 2014 Pantone Color of the Year shag rugs produced and ready to ship on the same day the formal announcement was made, we have delivered on that promise again. We are so excited for our retail partners to be the first among their peers in selling rugs featuring this now-famous color. Also, don’t forget, we will have several new collections, all containing Radiant Orchid, on display at the January markets!” said Jonathan Witt, vice-president of Oriental Weavers.

Pantone Announces the Color of the Year 2019: Living Coral

Pantone Unveils 2018 Color of the Year

Sherwin-Williams Reveals 2022 Color of the Year

Commercial Flooring from a New Point of View

We will discuss workplaces with differing needs, including healthcare, educational and corporate spaces—and how those environments are responding with flooring that is both practical and aesthetically exciting, and that approach the global health challenge in a positive way.