This website requires certain cookies to work and uses other cookies to help you have the best experience. By visiting this website, certain cookies have already been set, which you may delete and block. By closing this message or continuing to use our site, you agree to the use of cookies. Visit our updated privacy and cookie policy to learn more.
Home » NWFA Expo Sees Increase in Attendance
Breaking Flooring NewsTalkFloor NewsHardwood FlooringShows and Events for Flooring 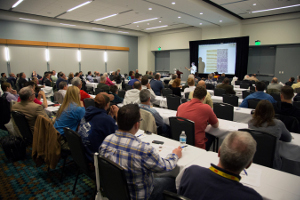 “We’re very pleased with this growth,” states Michael Martin, NWFA president and CEO. “It demonstrates that our industry is recovering after a sustained economic downturn. To have our show grow 30% in 2012, 20% in 2013, and now 30% again in 2014, is an indication that we can finally relax a little as an industry and start to enjoy our successes.”

According to Martin, the trade show had 20 more companies on the floor than in 2013, with 51 first-time exhibitors.

The NWFA completely overhauled the Expo in 2012, rebuilding the show, and the show staff, from the ground up. “We’ve tweaked the show a bit each year since then,” said Martin, “but essentially, we’ve found a formula that works for our industry that we’re pretty happy with,” said Martin.

Changes in 2014 included additional trade show hours, as well as expanded education hours. “This year, we tried something new as well in response to attendee surveys,” Martin explained. “We added a three-hour Wood Flooring University track on the last day of the show to give our attendees a deep-dive into issues affecting their businesses. We had tracks for certification, contractors, and for distributors and manufacturers. We also added a mill tour to our program, hosted by Somerset Hardwood Flooring, in conjunction with two continuing education units for architects and designers. This is the first time we’ve offered this kind of tour to reinforce our education sessions, and we had a waiting list of people wanting to participate. It was very well-received.”

Another education change was adding the NWFACP Symposium to the front end of the show and bringing in speakers that had expertise in areas impacting certified professionals. This helped to increase Symposium attendance by more than 50% from 2013, according to Martin.

Also new this year was entertainment. Because the Expo was in Nashville, also known as "Music City," music was incorporated into every aspect of the show. A bluegrass quartet opened the show, the keynote speaker, Robin Crow, incorporated music into his performance, the welcome reception included a live local band, and the Awards Dinner featured a private concert by Country Music Award and Grammy winner, Pam Tillis.

“We’re proud of what we accomplished this year, but we’re fully aware that we need to make it even bigger and better next year in St. Louis for NWFA’s 30th anniversary,” said Martin.

The 2015 Wood Flooring Expo will be held April 27-30 in St. Louis at the Edward Jones Dome, home of the St. Louis Rams. Visit www.nwfa.org for more information.