The Evolution of Cersaie

When you think of Italy, you probably envision endless amounts of pizza and pasta. Maybe its vast landscapes full of grape vines. Or even some of the world’s fastest cars. But, there is so much more that the country has to offer—especially in Bologna, the capital city of the Emilia-Romagna region.

Known for its legendary cuisine and world-famous university, the Renaissance architecture seen throughout the city that has been so preciously preserved over the last several centuries is the real aspect to take note of. Ancient towers and buildings remain fully intact while miles of decorated, arched colonnades shelter century-old terrazzo sidewalks. To say Bologna was a sight to see would be an understatement.

The Emilia-Romagna region is known for more than its food and architecture, though. It is rooted in a longstanding tradition of tile production, which attracts hundreds of thousands of professionals to the region each year for Cersaie, the international exhibition of ceramic tile and bathroom furnishings. Organized annually by BolognaFiere, the tradeshow has been deemed the world’s largest exhibition of ceramic tile, and deservedly so. There is no greater challenge than walking the 1.7 million square feet of exhibition space in heels—a feat that I have come to appreciate since I began attending in 2014.

This year, Cersaie welcomed 111,604 attendees to the Bologna Exhibition Centre, a 5% increase from last year, and the same surge it saw from 2015 to 2016. The show also saw growth in all exhibiting sectors, with a total of 869 exhibitors, one-third of which were foreign companies from 41 different countries.

The show’s importance to the industry was further confirmed at the international press conference, which is an integral part of the show that invites journalists and designers alike to learn more about the specifics of the Italian tile industry. Three years ago, Cersaie began hosting the event at the Ducal Palace in Sassuolo, located just 40 miles outside of Bologna, which has become a new tradition. Sassuolo is an industrial town that has been known for tile production since the 1950s, which currently produces 80% of all Italian ceramic tiles, with more than 300 operative tile factories. Referred to as “the global capital of ceramics” by Armando Cafiero, managing director of Confindustria Ceramica, the town was chosen as the press conference’s new venue to expand visitors’ knowledge on the region’s rich culture and history, as it pertains directly to the industry.

“Cersaie is not only about ceramic tiles; it is also a cultural tradeshow,” said Emilio Mussini, chairman for promotional activities for Confindustria Ceramica.

A cultural tradeshow, it is. With close to one dozen halls, the expansive show is designed to wander. Featuring extravagant booths that trump the size of the average apartment in New York City, to meticulously crafted mosaic setups involving life-sized mushrooms and flowers, completely new environments are created from one space to the next. And something is always guaranteed to catch your eye.

With the ongoing development of digital printing technology, differentiating between what’s real and what’s not has become more of a challenge. “Technology allows us to create all of the veins, knots and textures of the real products,” explained Cristina Faedi, head of promotional activities for Confindustria Ceramica. “We can reproduce imperfection, which is important.”

This has aided an emerging trend, which focuses on decorative looks. Customers are requesting more vibrant, out-of-the-box designs – inspired by unordinary elements, such as graphic wallpapers – to enhance staple designs.

A creative manifestation of decoration was seen in ABK Ceramiche’s Wide & Style collection, the company’s ceramic interpretation of wallpaper, according to marketing representative, Cristian Nizzoli. “It can give new life to things that have a vintage look,” he said, mentioning how ABK is encouraging designers to mix the design with any of its stone- and wood-look tiles.

Del Conca also encouraged the mixing and matching of collections with its newest artist collaboration, Valentina. Inspired from a 1960s comic by Italian artist, Guido Crepax, eight different designs from the original drawings are offered, which can be intermixed with any of the company’s collections.

Metallic elements and other patterned designs were also trending. Characterized as luxurious, these types of designs are created to complement neutral designs. “Golds, strokes of painting and fabrics; things that look like artwork,” said Faedi.

The Kora collection from Unica Ceramiche drew inspiration from metals, but in a glossier format, highlighting all kinds of intricacies. Streaks of bronze dominate the square-shaped tiles, which are suitable as accents or the main design element. 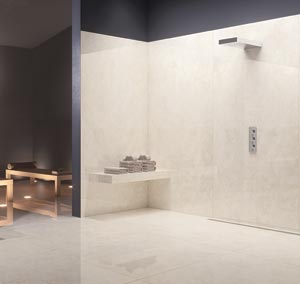 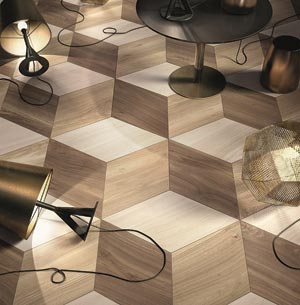 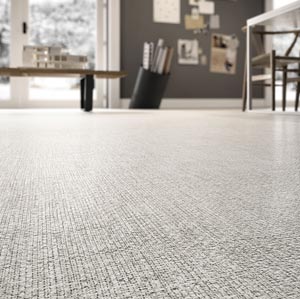 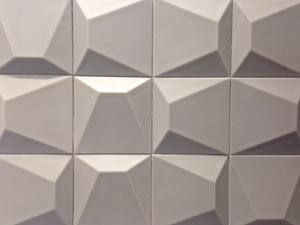 As Imaging Technology Improves, Distressed-Finish Ceramic Tile on the Rise

Multilayer Flooring Set for Success in 2020

In the February 2020 issue of Floor Trends, we look at the prospects for multilayer flooring this year and innovations that are priming the category for success.
View More Create Account