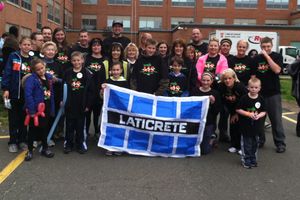 LATICRETE participated in a Multiple Sclerosis charity walk on April 22 in West Haven, CT, a process which started out with the firm supporting one of its own employee's long-term efforts in combating the illness.

Alicia Palimeri, Senior Buyer at LATICRETE, has been participating in the MS Walk for nearly two decades, and has consistently received financial pledges from LATICRETE in her pursuit to raise money and awareness in fighting MS. She first became involved with this cause when a family member was diagnosed with it. After a few years of participating in the walk, Palmieri was hired by LATICRETE and shortly thereafter, one of her co-workers was stricken with the illness. “It is amazing just how many people are affected by this disease,” said Palimeri. “I have had family members, co-workers and vendors that unfortunately were diagnosed with MS.”

Palimeri has been the local MS walker who individually raised the most money in past years. “By doing this, a person is able to positively touch the lives of people they don’t even know,” she stated.

LATICRETE has been a key partner in the success Palimeri has had in raising money for ongoing research that attempts to find the cure for MS. “This year, our CEO/Chairman, David Rothberg, generously pledged to match whatever contributions I was able to bring in,” Palimeri said. “I cannot overstate how much this meant to me, and also, what a difference it makes for those living with the disease. Every little bit helps. And clearly, to have the ongoing support of your employer elicits a wonderful feeling, one which really cannot be expressed in words. That is what LATICRETE is about, and its generosity did not surprise me one bit.”

Laticrete to partner with Votorantim Cimentos in Brazil

Shaw Contract Reimagines a Walk in the Garden