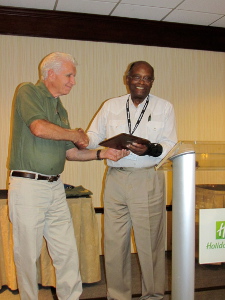 J. R. Harris, better known as “Junior” in the flooring industry with his big cowboy hat and boots, was honored as the second recipient of the Chris Davis Award for his numerous contributions to installation. Junior was instrumental in establishing CFI in the Maryland area.

In the early years, Junior relates a meeting with Jim Walker at a Karastan Convention and as it always does when Walker is involved, the conversation includes flooring installation. Jim said, “I have a dream that someday flooring installation will be recognized as a vital part of the industry and be performed by qualified professionals.” Junior immediately replied, “I want to be a part of that dream.”

Junior didn’t just say it, he went to work. He and Pat Fell, who was an employee of the L. Fishman Company, began working with CFI to bring training and certification to Maryland. They established the Delmarva CFI Chapter and began sharing installation knowledge with the flooring community. Numerous events were scheduled and the groundwork for the beginning of the great Delmarva CFI Chapter was in place.

According to Roland Thompson, CFI Delmarva President, “There is no one like Junior. I have been with him we he would load up his vehicle with props and supplies and off we went to another training event. No one knows how much money Junior took out of his pocket to finance the trips and purchase food and refreshments for everyone. “NO” was never in his vocabulary. It was just “make it happen.” He led by doing. “

“Today, even after his automobile accident, he continues to be a driving force in the CFI Chapter. It isn’t quite as easy for him to get around, but he is always looking over our shoulders to make sure we are doing our job. There will never be another Junior; he is one of a kind,” continued Thompson.

Junior was a retailer in the Baltimore area who believed strongly that good installation begins at the time of the sale. He has never wavered in his belief that dealers must get involved with their installers to make a difference. “I knew that if the installer going to my customer’s home was not qualified, I would spend way too many hours trying to make things right. I did not like that job, so we were proactive and made certain that those who represented our company achieved customer satisfaction so we could sleep at night. Folks, it is not that difficult,” said Harris.

The Chris Davis Award is given in memory of Chris Davis, who passed away in 2012. Davis was a true friend of CFI in his position of President of the World Floor Covering Association. In his memory, retailers who promote quality installation through their support of CFI are remembered. The recipient of the CFI Chris Davis Award is selected according to the ability and willingness to work with the flooring industry to build a stronger foundation between all partners. The person must also display the characteristics of leadership to achieve goals that are directly related to the advancement of quality flooring installation.

CFI is honored to award the prestigious 2013 Chris Davis Award to J.R. Harris.